Pipe Sizes, NB, DN and NPS - Are they all the same?

Pipe Sizes, NB, DN and NPS - Are they all the same?

First some common definitions of the two words in the title:

Nominal: as expected or planned; normal

Bore: diameter of a tube / pipe

So, putting those together we would expect “Nominal Bore” to mean the expected diameter of a tube - but within the realms of pipe support systems it is often a cause for error.

U-bolts, pipe clips, pipe clamps, hangers and of course our own modular pipe support system - the 1205 series, all have one thing in common - you need to know the size of fitting to fit your pipe. And this is where the “Nominal Bore” phrase comes into play, and where it sometimes goes awry.

For pipes, the bore is the hollow centre, and Nominal is used in the sense of “in name only” or approximate . Nominal bore is actually the approximate internal measurement across the diameter of the mouth of a pipe - NOT necessarily the expected diameter. 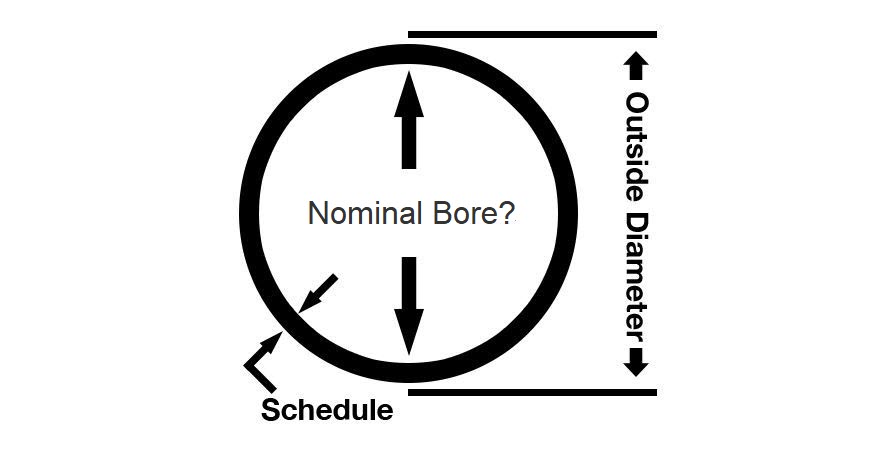 As we know, pipes are for carrying fluids and gasses and therefore the internal diameter is critical for allowing us to calculate capacity, flow rates etc. However, regulations govern the size of a pipe’s outside dimensions to ensure it is manufactured in standard sizes for easy fitting. But because pipes vary in material, weight, and the way they are formed, internal dimensions of pipes that share the same outer dimension may vary. For this reason, any measurement of that internal dimension can only be “nominal.”

It is worth remembering also that nominal bore can have different names. In the inch system, nominal bore is abbreviated as NB; in metric systems it is “diameter nominal” (DN), or Nominal Pipe Size (NPS) in North America.

For example a support that is quoted as 3”nb means it is for a PIPE with a 3″ nominal bore, and that PIPE has a fixed outside diameter of 3.5”. The wall thickness (Schedule) can vary hence the inside diameter is 3” nominal (around 3” up or down dependent upon the wall thickness)

There is an added complication. because of how pipes hve traditionally been made, the fact that the Nominal Bore size is less than the pipe outside diameter only holds up to a 12" pipe (300 NB). Above that size, the NB is the SAME as the outside diameter!

Leave a CommentLeave a Reply